ANNE OF A THOUSAND TALENTS 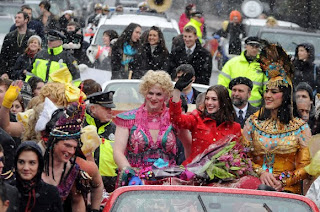 How adorable is ANNE HATHAWAY? Completely--and the whole package was on display this afternoon when she became Harvard's 60th annual Hasty Pudding Woman Of The Year! This little "roast and toast" has been going on since 1951 when the nation's oldest dramatic organization HASTY PUDDING THEATRICALS(a club since 1795)initiated the award with Gertrude Lawrence. Since then they have passed out little gold pudding pots to such stars as Katherine Hepburn, Elizabeth Taylor, Julia Roberts, Meryl Streep, Halle Berry, and now Anne Hathaway--who handled it better than just about anyone I've ever seen! 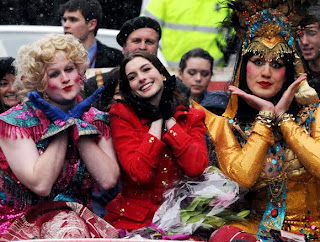 Oh she of the perfect, creamy complexion and dark chocolate eyes. This afternoon I was there as they paraded her around Harvard Square in the snow, in an open car, flanked by Harvard men in drag (a centuries-old Pudding tradition). Anne then gamely took the Hasty Pudding stage, a be-sequined figure atop the tallest platform stilettos I have ever seen, to face her "roasters." She sank them where they stood. These undergrads had more than met their match. With cheery aplomb, the "princess of diaries" deflected their lame jokes and crude quips about her "royal" roles and topless dramatic turns with grace, good humor, and an arsenal of her own: a killer soprano, perfect comic timing and a raft of credits. We know she can hold her own on the big screen; witness her parrying with la Streep in THE DEVIL WEARS PRADA, her Oscar nomination for RACHEL GETTING MARRIED, her improvisatory genius on Saturday Night Live, and last summer's critically lauded run in Central Park as Viola in Shakespeare's TWELFTH NIGHT.

By the end, the boys gladly surrendered the pudding pot as Anne thrilled--then buried them with a perfectly executed Shakespearean rhyme.

I can't wait to see her play the White Queen opposite Johnny Depp in Tim Burton's ALICE IN WONDERLAND due in theaters this March. But before that, watch for Anne to announce the OSCAR NOMINATIONS next Tuesday morning, February 2, at the crack of dawn--live from L.A.!

Next week JUSTIN TIMBERLAKE becomes Harvard's whipping boy as the 2010 Hasty Pudding Man of the Year. He's got his work cut out for him. I can hardly wait!
Posted by Joyce Kulhawik at 6:05 PM