COME BLOG WITH ME!/ HAITI RELIEF!!

Come blog with me! Let's blog, let's blog away!!!--Tonight! I'm blogging through the Grammy Awards on CBS (WBZ-TV4) 8Pm! Join me and my long-time producer, friend, soul sister, keeper--Marji Borkow! (She's the one who saves me from myself-- and I quote: "Are you sure you want to send that e-mail? " or in more dire circumstances, "Don't push that button!!!!"). We'll see who has the upper hand tonight as we kick back with a glass of wine and say whatever's on our minds as we watch Beyonce, Gaga, Taylor, and everyone else duke it out for the best musical performances of the year! 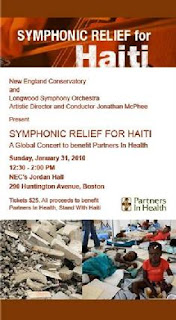 BUT MORE IMPORTANTLY--I'm just back from Jordan Hall where I emceed a global concert called SYMPHONIC RELIEF FOR HAITI which was simulcast on the world wide web around the planet!

How was it global??? Musicians from The Longwood Symphony, The New England Conservatory, The Boston Conservatory, The Longy School of Music, B.U., Harvard, MIT, representing 11 countries including Haiti, China, England, Germany Japan, and Switzerland performed onstage in Jordan Hall--while Symphonic Relief "sister concerts" were performed in the UK, Germany, Japan and 10 concerts across the US!

If you missed the concert and the webcast, you can still see it and donate to this global effort which was launched right here in Boston!

The WEBCAST should be up at www.empowerpeace.org by tomorrow at noon.

To DONATE to Partners in Health go to http://act.pih.org/page/outreach/view/haitiearthquake/symphonicrelief

In the meantime, pull up a chair and log into my blog just before 8PM tonight and let's rock the Grammies!