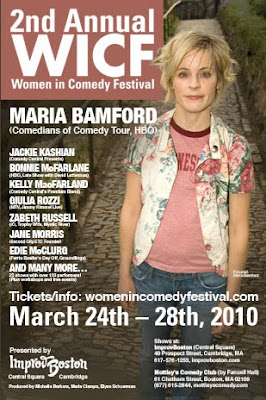 I have not dropped off the face of the earth. I have been rethinking the blog and meeting and talking and speaking and spewing and ducking the bricks being thrown by certain rabid members of the conservative right as they protest the healthcare bill.

WHERE IS THE OUTRAGE by the leaders of the opposition to these loathsome and dangerous tactics: spitting? brick throwing? death threats? What are we-- some third world country?? Keep this up and OBAMA'S going to look like a hero, so it's also stupid.
And the talk show hosts and pundits and politicians who are insidiously egging them on? You are COWARDS.

Today Minority Whip Eric Cantor finally stood up and said these acts were "despicable." No one on that side of the fence has had the guts to call these actions what they are: CRIMINAL! The whishy washy statement from Minority Leader John Boehner? Cowardly. And transparently disingenuous.

Now where was I? Oh yes. THE WOMEN IN COMEDY FESTIVAL is on in Boston--follow this link and have a good laugh!!
http://www.womenincomedyfestival.com