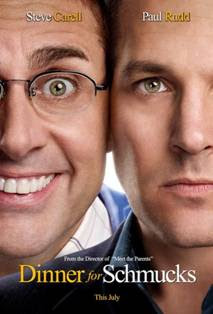 Here's a trailer of Concord MA. native Steve Carell's new movie with Paul Rudd due out this summer--a remake of a dark French farce called LE DINER DE CONS (THE DINNER GAME) which I loved.
But first DATE NIGHT--Which I did not. It's the #1 movie at the box office and in it we witness the knee-capping of two comedic giants: Tina Fey and Steve Carell. They gamely stumble through, crippled by a ridiculous plot about a suburban couple trying to re-ignite their relationship with a night out on the town; meanwhile it's the film that goes up in flames. Absurd events spin out of control in the hands of director Shawn Levy (NIGHT AT THE MUSEUM, THE PINK PANTHER)who's so ham-fisted he thinks Tina Fey slobbering over Mark Wahlberg's shirtless torso is funny the third and fourth time around. He throws in an endless car chase. In the middle of all the mayhem (crooked cops,a porn-soaked politician, a mob boss, Tina and Steve pole dancing) he attempts a poignant scene of marital reconciliation. He wastes countless talented actors--James Franco, Taraji P. Henson, Ray Liotta, Kristen Wiig, Mark Ruffalo, Leighton Meester, Mila Kunis-- on ill-conceived, misshapen scenes that go nowhere and add up to nothing.

Tina and Steve will no doubt walk away unscathed, but it must be hard to plug this garbage on all those talk shows. So back to Steve's summer outing. This July look for him in DINNER FOR SCHMUCKS. Click on the link below to see the trailer!