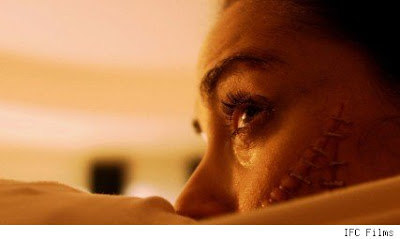 OK. I said I wanted to see it. It was the best picture winner at Screamfest 2009. It promised a "one of a kind experience...guaranteed to shock and divide" audiences, a "twisted biological horror film" by Dutch filmmaker Tom Six, involving a gruesome operation--and it is called THE HUMAN CENTIPEDE after all. So I thought, why not? Sure. Send me a DVD. The press rep did-- with the offhand remark, "You're brave."

Then it arrived and I kept putting off watching it. My daughter and five of her friends who love horror movies decided to watch it. Later, they emerged from the dark looking sick and queasy. They bleakly informed me, it wasn't exactly scary, it was much worse. My daughter muttered something about "six teenagers emotionally scarred for life."

I celebrated Mother's Day, and looked at that disc sitting on my desk again. I couldn't do it. Until last night. It's a sick ride all right--two stupid American girls wearing too much eyeliner and mascara land on the doorstep of the warped Dr. Heiter on a rainy night in the black forest. One look at this guy- he leered at them like a jackal in heat--and they should have goose-stepped on out of there. Instead, they accepted a drugged drink and woke up in an operating theatre where the good doctor sketched out his next performance, a kind of "anti-operation." You see--he had once made his mark in the world of surgery by separating Siamese twins. Well now that he's out of his mind, he's decided to reverse the procedure in a particularly unseemly way. He's going to link three human beings, on their knees, mouth to rectum, in one long gastric roller coaster, giving new meaning to the expression "head up your ass."I am not making this up.

I fought back the nausea and steeled myself to the end, unable to peel my eyes away from the extraordinary Dieter Laser, who plays Dr. Heiter, one of the most truly revolting onscreen incarnations imaginable; he makes Hannibal Lecter look like Little Bo Peep. His ultra-creepy mien was enhanced by his elegant surroundings; there's a brilliantly terrifying scene where the doctor is shrieking in ecstasy at his grotesque creation, while the enslaved human centipede is screaming in anguish.

There seemed too many ways for the girls, and later some detectives to have escaped, which diminishes (thankfully?) the tension, but the lingering feeling is one of sheer misery and horror at what is happening. One character cries out for mommy. Another screams "Make it all go away please!!!"

When it was over, I savored the relief of being able to do what those poor, unfortunately made up young women could not: make it all go away, please. Ahhhh. It was only a movie. Now Playing at the Coolidge Corner Theatre in Brookline MA and limited late night engagements across the country.
Posted by Joyce Kulhawik at 11:15 PM