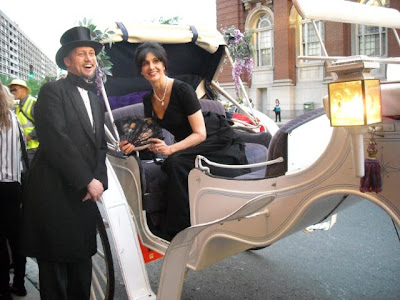 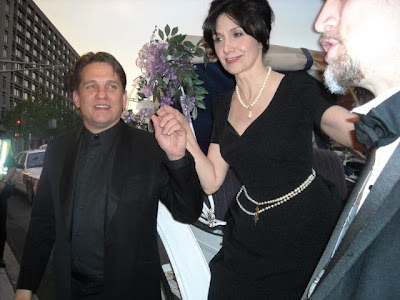 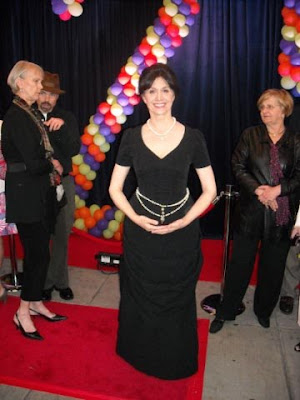 We arrived by horse and buggy last night as Maestro Keith Lockhart (he was so kind to help me out of the carriage) & the Boston Pops opened its 125th Anniversary Season. Of course some of the beautiful people from 1885 were there: BSO Founder Henry Lee Higginson (Matt Heck) and art collector and philantropist, she of the Venetian villa turned museum (though in 1885 the Gardner museum was but a dream) ISABELLA STEWART GARDNER (me)!

My gown--an exact replica of the one Gardner wears in the portrait painted by Isabella's friend John Singer Sargent, created quite a scandal in its day. The neckline was considered much too low and revealing and the strands of pearls too suggestively positioned. It was said that Sargent had painted her "all the way down to Crawford's notch!" Isabella's ("Mrs. Jack")husband, John Lowell Gardner, was so upset by it that he pulled the painting from public view and it was never exhibited again during his lifetime.

In stark contrast, I waved to people from my horse and carriage while they walked the neighboring streets, talking on their cells, drinking, eating; they seemed not at all scandalized by my formal attire. In fact, I couldn't help but notice how they delighted in rising to the occasion. One young man-- nearly naked in tank and shorts-- bowed; an older gent tipped his cane, and at least one cabby blew a kiss.

Later that night, I was happy to unload my bustle after a splendid program featuring the WICKED wonderful Idina Menzel, and Doc Severinsen! Overhead, balloons popped spontaneously --and unexpectedly as the pops played on.

Oh yes--Spring has definitely sprung.
Posted by Joyce Kulhawik at 11:23 AM