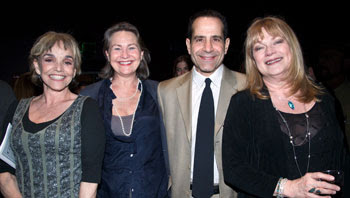 Monday night I emceed THE NORTON AWARDS at the Paramount Theatre! No. Not Ralph Kramden's sidekick. Elliot Norton, the Dean of American Theater Critics, who wrote for the Boston Herald, died at the age of 100, and in whose name we, the Boston theater critics, honor outstanding achievements in local theater every year. It's Boston's version of the Tonys: THE NORTIES!!!

Tony "Monk" Shalhoub and wife Brooke Adams were our honored guests, A.R.T. alum Cherry (Madame President)Jones was in the house, veteran A.R.T. alum Karen MacDonald won the Norton Prize for sustained excellence, while SpeakEasy and the A.R.T. cleaned up the awards! For a complete list of awards--CLICK HERE!

But here's what you didn't read in the morning papers:

--The Huntington's Michael Maso-- this year's StageSource Theatre Hero-- had the audience howling when he referenced previous Norton Prize winner Rick Lombardo's legendarily longwinded speech from two years ago. He said Lombardo,in fact, had had even more to say, but that he was interrupted by something. Dawn.

Two honorees from Orfeo Group--one of whom was wearing a short strapless cocktail sheath--catapulted right from the audience up onto the stage (which had no direct stair access)to claim their Norty, short-cutting the long trek through the wings that left all the other winners in need of oxygen.

The sound system for the entire powerpoint presentation wasn't working until 30 minutes before showtime. Talk about drama.

This Nortian had a blast!
Posted by Joyce Kulhawik at 8:07 PM