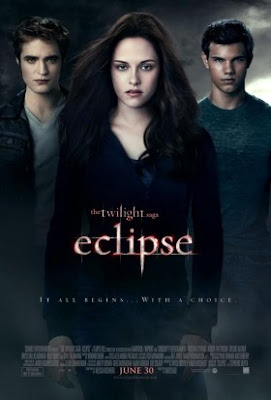 "THE TWILIGHT SAGA: ECLIPSE" TRAILER
It's beyond an eclipse. It's a black out of intergalactic proportions.

No one really expected this movie about Edward (Robert Pattinson) the vampire and Jacob(Taylor Lautner) the werewolf fighting over Bella (Kristen Stewart) the reluctant Swan to be great art. But I didn't expect it to put me into a coma. I listened to the books on tape and they definitely have the whole teen yearning romantic angst thing down--they are great outlets for all that ill-defined, unexpressed sexual energy--and the movie has NONE OF THAT.

This is without a doubt one of the most half-hearted, half-assed, cold-blooded imitations of a film I have ever seen. It's moviemaking by numbers. It's as though the filmmakers were all multitasking-- doing their laundry, filing their nails, returning phone calls-- and oh by the way making this movie, knowing they had a built in audience who'd come anyway. Just give them some young good-looking flesh, have them recite their lines, maybe twitch an occasional eyebrow, and teenage girls and their moms (you know who you are) would swoon.

It's cynical and lazy. There's nothing real here--no romance, tension, excitement,terror, beauty, sadness, humor,suspense,or coherence. Every scene is stripped of its dramatic potential and limply put forth in chronological order. Seeing Jacob phase into a werewolf is about as exciting as seeing him brush his teeth. There is ONE scene that sort of works--the one where Edward proposes--it's surprisingly tender and effective. But if you haven't read the books, you are lost in a heap of bad makeup, mumbled dialogue, and phony-looking, awkwardly staged action sequences. None of the characters have any real juice. It's like they all drank the Kool aid, and now it's being served up to us.