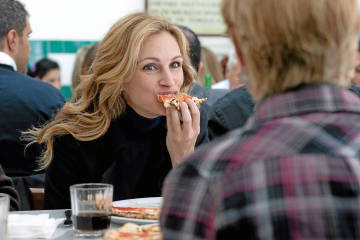 In the upcoming movie Eat Pray Love, Julia Roberts plays Liz Gilbert, a woman who steps out of her comfort zone and risks everything to change her life, embarking on a journey around the world that becomes a quest for self-discovery. The film, which is based upon Elizabeth Gilbert’s bestselling memoir, inspired the filmmakers to enjoy their own gastronomical trek through Italy – including famous places and some off the beaten track – that put them on their own version of Gilberts “no carb left behind” tour.

L’Orso 80, a crowded restaurant near Piazza Navona famous for their antipasti, became a favorite spot for the production– not only did the cast and crew eat here, but it’s featured in the film, as a gathering spot to watch Rome take on Lazio in soccer. (However, L’Orso 80’s owners must have been mildly chagrined to see the 75 extras were decked out in Rome’s orange and burgundy – they are Lazio fans). More information about L’Orso 80 can be found at http://www.orso80.it/index.htm.

Another favorite Rome restaurant and filming location near Piazza Navona was Osteria Dell Antiquario. Located in a 16th-century stone stable, this out of the way place between the Piazza and St. Peter’s is just beginning to be discovered.

The production also shot at Antico Caffe Della Pace. Since the 18th Century, there’s been a restaurant on this spot, providing inspiration and libation to artists and writers. This enchanting location inspires anyone who manages to get a highly coveted table on the terrace. More information can be found online at http://www.caffedellapace.it/.

Moving on to Naples, the production filmed at L’Antica Pizzeria Da Michele – a simple place so highly regarded by the locals that the line for a pizza is often out the door and around the block. Founded in 1933, the pizzeria today makes 180 pizzas every hour – each pizza takes only 30 seconds to bake in the 800-degree oven. The pizza is sold in only two sizes (regular and large) and variety (marinara – dough and sauce – or marinara and mozzarella), but with basil and a little olive oil it becomes an unforgettable delicacy. The restaurant can be found at http://www.damichele.net/.

Susan Spungen was the production’s food stylist. After serving in a similar role on the hit film Julie & Julia, Spungen was responsible for cooking, prepping, and styling all of the food in the Italy sequence (except for the Naples pizzas, where the restaurant handled things – “no one does it better,” she says). She also cooked 20 turkeys and tracked down cranberry sauce – not an easy thing in Rome – for a Thanksgiving celebration scene.

To find images for the food and locations just mentioned go to ftp://sphoto01:spf0to29@speftp.spe.sony.com. To see the trailer and find more information about Eat Pray Love, please visit www.sonypicturespublicity.com.
Posted by Joyce Kulhawik at 2:55 PM