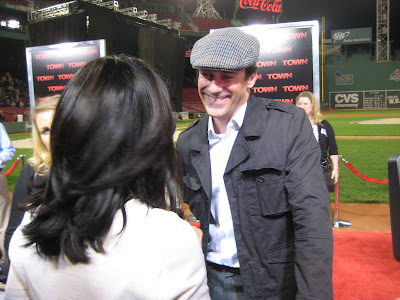 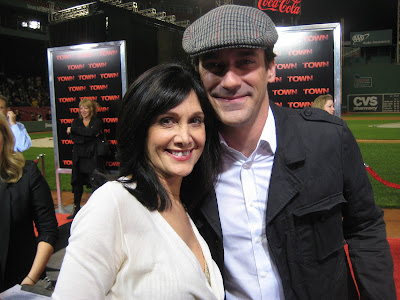 Last night Jon Hamm and I got to first base. Unfortunately he was wearing a hat at the time and his girlfriend, Jennifer Westfeldt (looking fierce in higheeled ankle boots), was not far afield--and what a field: Fenway Park, between first base and home plate where a red carpet was rolled out for the premiere of Ben Affleck's new movie: THE TOWN, as in Charlestown. That's where the movie was set and shot last year. Ben chose Fenway for the premiere because a scene in the film was shot there, and Ben and Matt (Damon of course), are Red Sox fanatics. In fact, Matt who showed up with his family to support Ben, mentioned that he and Ben had actually both shot at Fenway before--when they were teenagers with stars in their eyes and were hired as extras in FIELD OF DREAMS!!!

Other stars on the red Carpet-- writer,director,star Ben Affleck of course, gorgeous Gossip Girl Blake Lively who confessed she had to beg Ben to audition her for the part which she eventually won, the talented Brit Rebecca Hall (VICKY CRISTINA BARCELONA) smashing in a gown by Italian leather house Bottega Veneta--did she actually say that? The top of the gown did appear to be made of red leather...! And Chris Cooper who raved about Affleck's directing skills, and Jeremy Renner (THE HURT LOCKER)who said he had absolutely become a Red Sox fan.

But getting back to Jon Hamm. He couldn't have been nicer. Or more beautiful, despite the hat which he said he was wearing because he didn't like his hair. He does however "love" Boston. Loves our boy Ben whom he found very funny, and said he'd gotten an appreciative note from Scott Brown after Hamm nailed him in that infamous SNL skit. AND...he agreed to pose for the above photo with yours truly.

I have been covering this beat for 28 years. I have never asked for a photo with ANYONE on a red carpet, ever. But this week is my birthday. Jon (that's what I call him) asked if I was turning 25. Then my camera crew snapped the photo. I think my birthday celebration just started.
Posted by Joyce Kulhawik at 11:27 PM