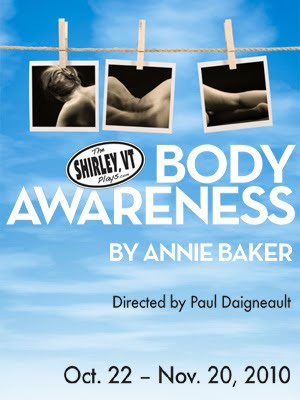 Never heard of Shirley, Vermont? It's a figment of playwright Annie Baker's imagination and is the setting for a trilogy of plays that have recently found a home in our town: CIRCLE MIRROR TRANSFORMATION, BODY AWARENESS, and THE ALIENS. I finally saw all of them beginning with "CIRCLE" presented by THE HUNTINGTON about the interpersonal dynamics of an acting class. It's barely a play; it was "survivable," in the damning words of my mother who raced to see it with me one night. It's over.

No matter; the next two were better and there's still time to see them through November 20: BODY AWARENESS presented by SPEAKEASY STAGE COMPANY features Paula Plum and Adrianne Krstansky as Joyce and Phyllis, a lesbian couple who host an artist in their home during "Body Awareness Week" on the college campus where Phyllis is a professor. They also have a son who may have Aspergers. The artist in their residence turns out to be a male photographer who specializes in female nudes. With the introduction of this additional testosterone, the family dynamics go kaflooey. Well-acted and nimbly directed by Paul Daigneault, with quietly hilarious observations about small-town college life and the politics of sex, the play is charming, if slight.

"The Aliens" presented by COMPANY ONE

But I've buried the lead. By FAR the best of the plays is THE ALIENS presented by COMPANY ONE. It's a minor masterpiece that put me in some kind of pre-verbal trance; I laughed myself silly till I cried, and remembered things I had long buried. The play involves two hippie-like dropouts, hanging out with the garbage behind an old coffee shop, drinking, smoking, playing music, and philosophizing: lost girlfriends, Bukowski, novels, poetry-- all in a haze of sustained torpor. They discover an acolyte in the person of a mumbly, unformed 16 year-old boy who comes to regard their trippy ramblings as genius. It's all about loneliness, and connection, and longing... they are latter day Beckett hobos on drugs... the play has more silence than most theater-goers are used to-- and most playwrights can bear. Director Shawn LaCount lets this work breathe its beautiful rhythms. There's at least one towering performance: Alex Pollock as"KJ," a space cadet of the first order who calls himself "a martian masterpiece...a triple dimensional superstar." No I'm not on anything; just see THE ALIENS at Company One through November 20.
Posted by Joyce Kulhawik at 8:59 PM