A WACKY WEEK AROUND THE GLOBES... 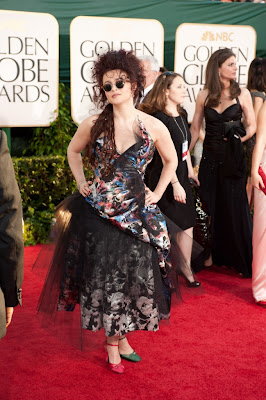 Weird week. More about the above photo in a bit.
-- Survived the second blizzard of 2010. 20 inches plus!!! YAY!
-- Found out I almost wasn't a Virgo. I still am. Close call.
-- The Pats succumbed to the loudmouthed Jets--perhaps there is no cosmic justice. Even I-- who could care less about sports-- found myself scouring The Globe this morning searching for the reasons, the turning points, the ANSWERS to how there could have been so much failure to execute. Is the Pat's game too Brady-centric? Is it so transparent that all the insufferable Jets had to do was crack the quarterback's code to leave us defenseless? Is there NO back-up plan? Whatever.

So I watched The GOLDEN GLOBES, the notorious pre-cursor to the OSCARS hosted by comedic terrorist Ricky Gervais. Last night, he didn't just push the envelope, he exploded it, leaving the audience to sift through the wreckage. Ricky left more than a few bodies in his wake and made us squirm; I'm not convinced that's entertainment. During the second half of the show he seemed somehow chastened-had someone terrorized him during intermission??

Onto the awards--I believe the top three awards last night will carry over to the Oscars, though they will be chosen by an entirely different voting body. THE SOCIAL NETWORK will win Best Picture, Natalie BLACK SWAN Portman will win Best Actress, and Colin THE KING'S SPEECH Firth will walk off with BEST ACTOR. Robert Downey Jr. gave a sharply funny, articulate, self-deprecating presentation of the Best Actress nominees, without sacrificing any of his edge, dignity, or the dignity of those he was introducing. Ricky, pay attention. 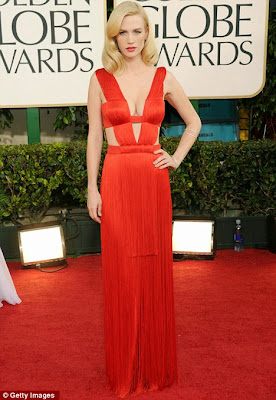 Now for the RED CARPET!! Everyone who thought January Jones, Halle Berry, and Jennifer Lopez were the most gorgeously turned out women there, raise your hands. January was glorious in red strappy Versace, a retro shoulder length page boy, and full red lips. Anyone else would have looked trashy. She remained elegant, her sylph-like silhouette barely covered by that extraordinarily engineered gown. 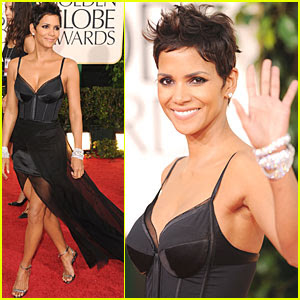 Halle was pure sex in her black, spaghetti strapped, tight-bodiced, slit-skirted chiffon gown. She has the most perfect torso in tinsel town and needed no adornment--the shortest hair, no jewels other than diamond cuffs. The more of her we
see,the better the view. 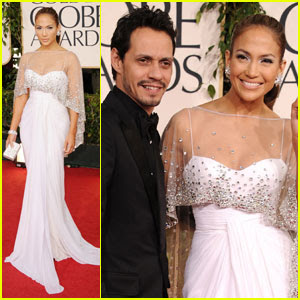 And finally, Jennifer Lopez. That gown would have made anyone else look like the mother of the bride. Instead, Lopez transported us to another plane: she was a gleaming goddess in white against flawless skin and a high ponytail to highlight her high cheekbones. Girl we couldn't get much higher.

Now a word about Helena Bonham Carter. See photo at top of blog. She's gorgeous, and she's marching to her own inner fashion muse. She looks wild-eyed, like someone's lunatic aunt, wearing mismatched shoes, post-apocalyptic hair (Perhaps she and Keith Richards share a hairdresser?),and a dress that appeared sewn together from couch upholstery.
I LOVE HER. Thank you Helena. See her in THE KING'S SPEECH.
Posted by Joyce Kulhawik at 3:54 PM