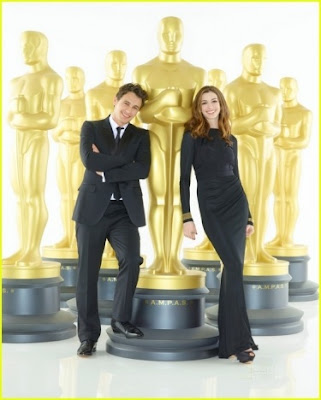 Sunday's the big night and you're all invited to Joyce and Marji's Online Oscar Party! We'll be tweeting about every number, celeb, gown, winner, loser, and assorted gaffs and triumphs!
But all we can do for now is prognosticate--so here's how I see the biggest reality contest in the world shaping up in the major categories:

BEST PICTURE: THE KING'S SPEECH. A few weeks ago I thought it would be THE SOCIAL NETWORK but it's definitely lost momentum lately largely because so many people have come out to see the true story of a would-be king who literally finds his voice. The film also topped the SAG, DGA, and PGA awards.

BEST DIRECTOR:TOM HOOPER "The King's Speech." The Director's Guild has given him the nod and I think he will edge out David Fincher for "The Social Network."

BEST ACTOR: COLIN FIRTH, "The King's Speech." It's the surest thing in this crazy mixed up world.

BEST ACTRESS: NATALIE PORTMAN, "Black Swan." There's an outside chance of an upset here with 4X nominee Annette Bening, "The Kids Are All Right" swooping in to knock Portman off her roost. If so, you won't hear any squawking from me!

BEST SUPPORTING ACTOR: CHRISTIAN BALE,"The Fighter." Bale was extraordinary--but if there is an upset it would be Geoffrey Rush whose performance might have gained some momentum recently along with his film "The King's Speech."

BEST SUPPORTING ACTRESS: This is the category ripe for an upset. MELISSA LEO in "The Fighter" will probably pull this off; she was a sure thing up until she posted those embarrassing ads asking people to "CONSIDER" her. Pathetic, given that she had clearly been considered, and in fact had won the GOLDEN GLOBES and SAG AWARDS.If there's an upset,it would be AMY ADAMS, Leo's co-star in "The Fighter." Want to know who really should win in this category??? JACKI WEAVER in one of the year's BEST but least seen movies: ANIMAL KINGDOM. Weaver played a mother so sinister and controlling, she'd have reduced Melissa Leo's character to a quivering heap- and barely have raised an eyebrow.

Come TWEET with us Sunday Night beginning with the arrivals at 7PM EST!
Posted by Joyce Kulhawik at 11:38 AM