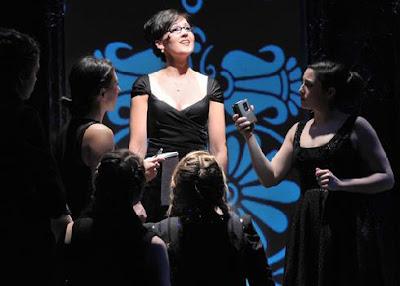 Fellini began it with Marcello on the big screen when it was "8 1/2." Then Tommy Tune had his way with it on Broadway after Katherine Hepburn gave it a nudge and it became the Tony Award winning musical "NINE." In 2009 that musical hit the big screen with Daniel Day Lewis, Penelope Cruz, Nicole Kidman, Kate Hudson, Fergie, Marion Cotillard, Dame Judi Dench, and SOPHIA LOREN!!!! I was the only critic in the universe who liked it.
Now NINE is back and thriving at the SpeakEasy whose little stage is bursting with Boston's best singers! See Guido(the big-voiced Timothy John Smith) belt out his conflicting passions. See the sexy, elegant wife Luisa (Aimee Doherty)and minx of a mistress Carla (McCaela Donovan)battle for Guido's body and heart, while his luscious muse(Jennifer Ellis)fights for his soul, and Kerry Dowling as the lusty Sarraghina of his youth mops the floor with him. Though Act I builds to a climax which Act II fails to... to...fully discharge, the flaws of the play are not the flaws of the production; in fact the production has been extended!!!!! Until February 26. See it before it leaves and
Be Italian!
Posted by Joyce Kulhawik at 5:47 PM