STAGE ROUND UP: 9 CIRCLES, PROMETHEUS BOUND 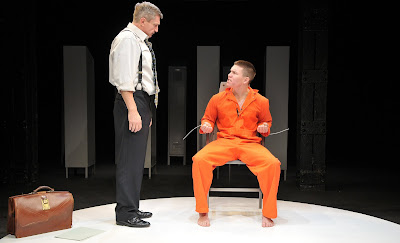 9 CIRCLES is having its East Coast premiere at PUBLICK THEATRE. It's not "shocking" or "bitingly funny." What it is, is timely and smart-- about what can happen to raw recruits when you train them to follow orders, kill, and pitch them into battle. The play by Bill Cain refers to nine circles of hell in Dante's INFERNO. The inferno here, is many- layered and based on real events-the first circle, the factual one: a soldier stands accused of committing atrocities in Iraq. To what extent is he accountable-- and to whom? The soldier is sympathetically played by Jimi Stanton, who balances this young man's lack of self-awareness with his knack for asking uncomfortable questions that shake up the chain of command. Gradually, the shifting tectonic plates of conflicting ethical parameters erupt in a less than earth shattering quake of revelation. Given the crime and the issues at stake, Eric Engel's direction is perhaps too spare-- or maybe the play is too cerebral. Will McGarrahan in a number of roles fails to succinctly distinguish one character from another.
9 CIRCLES runs through APRIL 9!

PROMETHEUS BOUND director Diane Paulus's latest extravaganza is a rock n' roll take on Aeschylus defiant hero. System of a Down lead singer Serj Tankian has written a vibrant and melodic score-- a soaring, anthemic cry against tyranny raucously staged, up and down and around the "theater in a nightclub" that is OBERON, the A.R.T.'s second stage. The weak link at the heart of the production is a generic performance by Gavin Creel who writhes and sings and does all the appropriate things a god in bondage would do, but lacks the voice to compel, and the charisma to make me care about Prometheus' plight. But Uzo Aduba as "Io" is a powerhouse of emotion, with a voice muscular enough to shake the lust out of Zeus on Mount Olympus.
PROMETHEUS BOUND now playing at A.R.T. in Cambridge.
Posted by Joyce Kulhawik at 3:19 PM