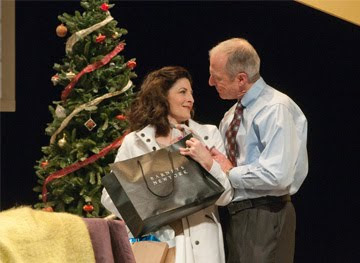 Many people have taken a crack at Henrik Ibsen's A DOLL'S HOUSE over the centuries, but this time instead of an outraged public, or half-cocked critics, it's a playwright herself--Theresa Rebeck (of MAURITIUS and BAD DATES fame)who has set her contemporary sights on Nora and Torvald.
In the New Rep Theatre production of DOLLHOUSE they become Nora and Evan, an ornamental suburban housewife and her upwardly mobile blowhard of a husband. I heard a man leaving the theater say that in the original he felt sorry for the wife; here he felt sorry for the husband. And how.
This Nora is pretty juiced up in the hands of Sarah Newhouse, in her New Rep debut, as a sexy trophy for her smug hubby played with blind condescension by the great Will Lyman. They move through their beautiful house, as people and secrets from the past literally creep back into their lives through the front, rear, and side doors. The only weak link in this update is the long-suffering Damien (Diego Arciniegas) who's not quite unrequited love for Nora causes him to mope off; I just didn't believe this relationship.

But the second act ratchets up the drama until the tension nearly blows the roof off their lovely Connecticut McManse, and Nora firmly makes her way out into the night, reclaiming her dignity and herself, leaving her deflated husband to play with the toys she's left behind. No matter how we dress these characters up, there's still plenty to think, talk, and argue about. So make it a date night-- and prepare to spar.
Don't miss DOLLHOUSE- at the New Rep Theatre through 3/20!
Posted by Joyce Kulhawik at 10:46 PM

Labels: But there's plenty to play with in this DOLLHOUSE - it's amazing how