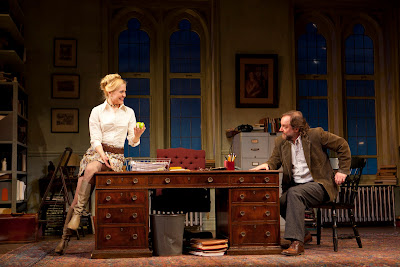 I remember the 1983 film vividly, with its Oscar-nominated performance by Julie Walters opposite the charismatic Michael Caine. Willy Russell's play now onstage at the Huntington is more concentrated and even more enjoyable: witness two terrific actors squaring off in neatly calibrated performances and dramatically escalating scenes, pitting a lower class hairdresser's insouciance and eagerness to learn, against her upper class tutor's cynicism and insistence that he knows nothing. Jane Pfiitsch is the feisty and refreshing student Rita, Andrew Long her disillusioned and often-inebriated Professor Frank. It's a tale more complicated than its structure suggests; it's Pygmalion wrapped around Frankenstein animated by a Socratic debate: What is the value of an education anyway? Is it an uplifting way up and out? Or a monstrous overlay of self deadening spare parts? The play suggests it's actually a means to questioning the very nature of learning itself. You'll be glued to your seat as the these actors go at it with all the weapons in their arsenals: perfect comic timing, big hearts, and heavy accents, so listen carefully.
The set by Allen Moyer with giant Gothic windows center stage framing moody English weather, is to die for.
Don't miss EDUCATING RITA at the Huntington through April 10!!
Posted by Joyce Kulhawik at 9:52 PM