Let's begin with the royal idiot, shall we? That could only be Donald Trump who has trumped even Charlie Sheen in playing The Court Jester: Trump is now officially the village idiot. When I first heard he might actually be contemplating a run at the White House, I admit I thought (as one who is never afraid to think outside the box) that's SO crazy it just might work!!! Well, a nano-second later, it turns out--it was just crazy.

By insisting that the president produce evidence of his birthplace, Trump confirmed his own citizenship in the land of Kookville. And now Trump wants to take a closer look at the paperwork!!??? The man is clearly inscrutable. Maybe Trump flunked geography and history. Or perhaps he's cynically courting the wacko fringe element that still thinks the world is as flat as the hair on his own head...in which case, he's alienating everybody else, but-- along with H.L. Mencken and P.T. Barnum-- believes the numbers are on his side. Maybe no one ever did go broke underestimating the intelligence of the American people, and perhaps there is a sucker born every minute, but don't we want a president who at least thinks those are open-ended questions? Obama nailed it when he indirectly lumped Trump in with "carnival barkers"; in fact that is Trump's forum: the circus. And we all know how I feel about circuses. (see my last blog) 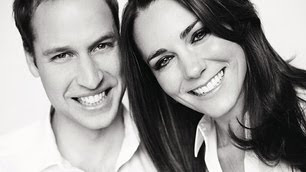 Onto The Royal Wedding!! I will be setting my alarm for 4 o'clock in the morning and watching in my pajamas as Kate Middleton takes that 4-minute walk down the aisle of Westminster Abbey with the eyes of half a billion people on her. I remember watching Diana's wedding -- in a hotel room while vacationing in France. None of our accommodations up to that point included TV's, but that night in the little Alsatian town of Colmar, the room didn't have much, but it did have one giant television, and I was glued all morning!! I will be watching ABC, with Barbara Walters and Diane Sawyer-- history and beauty-- as my guides. OK. I know... I'm nuts. But I'm not running for president. Pimm's anyone?
Posted by Joyce Kulhawik at 1:03 PM