A WORD ABOUT OPRAH 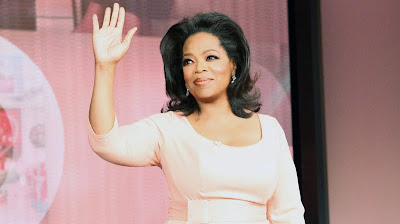 I am sad she has left her daily show, though I know we'll be seeing a lot of her. I know millions of people love her, I love her, and many can't stand her. Narcissist they say. Self-important. Phony. If that's true, all I can say is-- she's made the best use of narcissism I've ever seen. For 25 years the woman has literally helped millions of people in countless ways: she's shed light on tough, controversial subjects from drug addiction, sexual abuse, animal abuse, domestic violence, suicide, homosexuality, prejudice of all stripes. She's championed education by sending tens of thousands of people to college, built a school for young women in Africa, gotten people reading, shared her wealth and targeted the most under-served for her generosity; she has fostered a culture of philanthropy by seeking out the most giving among us, and encouraging everyone she's helped to pass it on. She's also given us loads of fun and entertainment. She's confronted her own demons publicly, faced her mistakes and controversy head on, has never been tainted by corruption or scandal, and did this on her own steam, coming up from virtually nothing as a poor, black, sexually abused female from a broken home in the rural south.

Excuse me, but what do you want from a person, Alex Beam?Grow up.

If Oprah wants to celebrate for 3 days or 3 weeks or 3 years, it's OK with me. She's earned it. A phony? No phony could do that much good in the world. I wanted her to celebrate-- because I felt like WE were celebrating-- all of us. She has used herself like a mirror; in her, many people found themselves, literally. Through her enormous intelligence, energy, resilience, flaws, and talent, through her relentless seeking and then finding the power to do whatever needed to be done, viewers have been reminded of their own power.

So when Alex Beam begins an article (Boston Globe May 24 "Say Goodnight, Oprah") about Oprah's farewell by actually calling her names in the first paragraph, he invalidates himself as a serious thinker and journalist. Oprah may be off-putting to some, but to ignore her monumental achievements and pack such vitriol into an irrational, juvenile diatribe smacks of the kind of ego-driven sensationalism Mr. Beam has accused Ms Winfrey of.

Oprah needs no defense, but Alex does. He's lost his head; not to panic-- he'll find it at his next colonoscopy.

Sorry Oprah, I know you wouldn't have said that, but I feel much better.
See you on OWN!!
Posted by Joyce Kulhawik at 3:23 PM