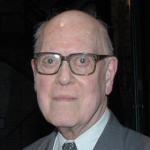 Our dear President of the Elliot Norton Awards, Caldwell Titcomb, died early this past Monday morning from leukemia. His sister Camilla said he died peacefully, and was sure he had just watched the Tony Awards that night.

That was Caldwell-- or "Caldy" as some of us liked to call him! He adored theater and his last public appearance was last month at the "Norties"-- Boston's version of the Tony's, where he on behalf of the Boston Theater Critics Association presented the big prize of the evening. He took the stage with his walker, and delivered his presentation in the dignified, understated, and articulate way he always had. A learned man, kind and genteel, Caldwell received three degrees from Harvard including his Ph.D. He was a professor emeritus at Brandeis, and a composer of music for theater. I remember getting postcards from him in London when he'd fly over every summer and see 10 or 15 productions at a clip and send back encapsulated reviews penned in his tiny, elegant script.

What I will always admire most about Caldwell was his even temper, good humor, and strength of character. Though he'd been battling the disease for some time, he exercised daily, kept up with correspondence, edited text from his computer, and attended as many theater critics' meetings and productions as possible. He'd invite us to his birthday celebrations, but never wanted a fuss and would be truly upset if anyone crossed his threshold with a gift.

The last time I saw Caldwell was last week when I picked him up for our theater critics' meeting in town. He was waiting punctually at the appointed hour, outside, in a jacket and collared shirt, with his walker; as I pulled up, and made my way out of the car, he had already folded up his walker, put it in the back seat, and was halfway in the passenger side before I could even get to him to offer help. He never complained. He just got on with it.

Now we must get on without him, but his strength and sweetness will always inspire me.
We love you, Caldy.
Posted by Joyce Kulhawik at 10:58 AM