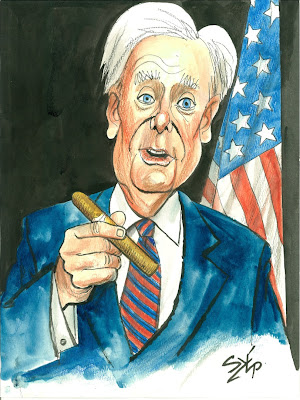 (courtesy Paul SZEP)
Just saw my old pal Emmy award-winning TV commentator and political observer Dick Flavin in a new role yesterday: he took the stage as the inimitable Boston Pol and, by the way, Speaker of the House--Thomas P. "Tip" O'Neill. The one-speaker show is called ACCORDING TO TIP and had its last incarnation onstage here in Boston when the burly, bulbous-nosed Ken Howard took on the role a few seasons back. Dick is slighter in stature, but conveys the heft of the man's character and "man of the people" warmth and good humor. The script immediately draws you in, despite it's lack of salacious tidbits that pass for memoir these days. This is NOT an expose, but rather a charming look at a kinder gentler era when political enemies would put aside their differences and pal around after hours over cards and a few drinks.

Flavin fully inhabits the Irish character from his humble Cambridge beginnings to his rise through the ranks of the democratic party rubbing shoulders with everyone from JFK to Reagan. TIP does save a few harsh words for Newt Gingrich and Bobby Kennedy, and a few funny quips about Sophia Loren and Warren Beatty. Flavin is believeable in the role, with a natural born raconteur's charm and ease as he dispenses TIP's ("Tom" to his friends) hard-won political wisdom: always ask for a vote, be honest if you take a controversial stand, and the classic: All politics is local. 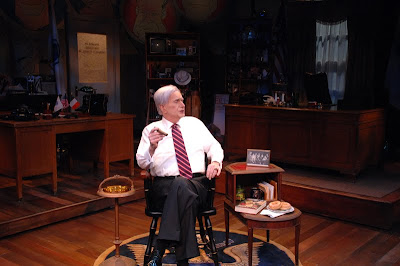 Dick holds the stage alone for two hours with intermission; I was in awe of the number of words this 74 year old-- and recent throat-cancer survivor (!) commanded; but then, he wrote them, too!
Congrats Dick! See ACCORDING TO TIP June 9-July 3 at the Lyric Stage Co. of Boston!
Posted by Joyce Kulhawik at 10:19 PM