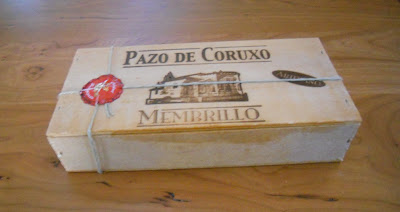 I know I'm on vacation when I find lobster in my hair. And so it begins...Last night my husband Andrew Cohen is flying in from Spain to meet me on the Vineyard. He stops off at Logan for a connecting flight--when suddenly airport security yanks him and his luggage out of line. They hustle him into a back room and immediately start questioning him about the suspicious looking bundle they've picked up on x-ray in his baggage: a rectangular box, a watch below, and wires coiled nearby.
"What is this?" they ask.
"A gift for my wife."
(Yes we have an explosive relationship, but this is ridiculous.)
Huh? They silently eye him. They commence opening.
Inside, they uncover a pair of headphones, an ordinary wristwatch, and a twine-wrapped wooden box filled with--TA DAH: quince jam. It's clear my husband came not to destroy --but to preserve.
"We had a moment of excitement there," said the TSA officer as they slowly re-assembled the package and headed off, hot on the trail of a dangerous looking elderly woman with what might be --a pant load of trouble.
***
The next adventure was awaiting my husband at home--a delicious seafood dinner prepared by Neil Cohen my bro-in-law and graduate of Cornell's famous Hotel School. The centerpiece of the meal was something so delicious, but which had never crossed our palates before, despite years of culinary escapades the world over. Neil had spotted these in the case at John's Fish Market in Vineyard Haven, and Sandra the owner behind the counter said, "We don't have these very often; they're a pain in the neck to clean."
Bass cheeks.
Neil hesitated; the woman behind him in line had her eye on them too. He bit, brought them home, brushed them with a little lemon juice and butter, salt, pepper, and paprika, then threw them on the charcoal grill. He served them with a little caper butter and white wine sauce, and they were the lightest, freshest, sweetest cheeks I've ever tasted. No kidding. Check out the cheeks.
PS: My husband's the bomb.
Posted by Joyce Kulhawik at 11:15 AM