THEATER: THE GERSHWINS' PORGY AND BESS 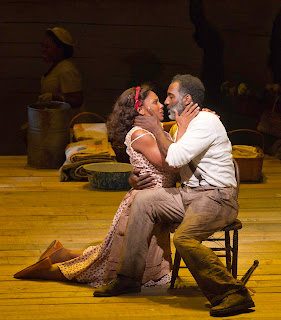 There will always be a few nights at the theater that I will remember my whole life, when I was swept up in something truly thrilling and sublimely beautiful. Last night was one of those nights. I sat transfixed at the A.R.T. as Audra McDonald and Norm Lewis sang us to Nirvana in the new adaptation of PORGY AND BESS, a once-daring new opera that put the largest entirely black cast on the American stage for the first time--Boston's Colonial Theater to be exact--in 1935. The work has been "in progress" ever since, and now a talented triumvirate -- Pulitzer Prize-winner Suzan-Lori Parks, Obie winning composer Dierdre L. Murray, and A.R.T. artistic director Diane Paulus-- have reinvigorated it yet again. They have given us a physically stripped down, but dramatically punched up powerhouse of a rendition which allows George and Ira Gershwin's and Dubose and Dorothy Heyward's groundbreaking masterpiece to breathe in a new way. The result is a production at once epic and intimate, modern and urgent, perfectly cast and beautifully lit and choreographed.

THE GERSHWIN'S PORGY AND BESS begins with the soaring,indolent lullaby SUMMERTIME sung alone onstage by Clara to her baby. And it's a REAL living breathing baby; yes--this production is alive in every sense of the word. The opening scene finds its apotheosis in the production's Pirandellian final image: Porgy heading out alone, upstage, into the darkness, the set falling away, as he seeks a new beginning with the elusive Bess. In between, lies the desperate love story of the beautiful, lonely, tormented Bess victimized by a jealous and murderous lover, Crown; she seeks refuge in the arms of the physically crippled but emotionally complete Porgy, who only wants his Bess, and wants her to be happy. In duet, their voices, curl achingly around each other-- she wrapt by his radiant goodness, he by her ardent sensuality, and even deeper longing for what only he can give her: a home. McDonald's Bess is perfection; she is a tremendously expressive actress and a wondrous singer, with flawless technique, every note and musical phrase shaped to express the nuances of Bess's yearning, fear, joy, and sexual hunger. As Porgy, Norm Lewis may be a less formally accomplished singer, but his purity of tone and emotional directness will stop you in your tracks; the transcendent humanity of this extraordinarily decent character brought the house down.  When Lewis sings "I Got Plenty of Nothing,'"  it blooms fresh onstage; he's the incarnation of the sheer joy of being alive. By contrast Phillip Boykin brings a threatening coarseness to his resounding baritone as the brutish Crown.  The dramatic tension embodied vocally by each character in this explosive triangle is part of what makes this production feel so rich and alive.

Gershwin's score introduced rough and ready jazz and blues to classic operatic form and the result was pure exhilaration. This production builds on that musical premise, further adapting its form to the musical stage. Some of it is spoken, some is sung, and the result is pulse-pounding immediacy. The versatile and cohesive ensemble--equally dazzling in quartet and trio--brings everything it's got to every number. "Leaving For The Promised Land" lifts them up in a jubilant prayer song culminating in the blinding white light of redemption. "It Ain't Necessarily So"  led by David Alan Grier's dazzling  Sporting Life is infused with broad, wry humor and rollicking choreography. The sparely naturalistic set further liberates the drama and keeps our focus on the internal momentum of these characters, as does the lighting which the actors themselves seem to emit.

I could go on. And on. And so did last night's audience-- on its feet and after 4 curtain calls, still cheering for more. I was elated, having been moved all night to tears and goosebumps. I am going again, and bringing my family. I urge you to do the same before the tickets run out and it heads to Broadway. The run ends Oct 2!
And if anyone's wondering if it's wrong to tamper with a masterpiece--it ain't necessarily so.
Posted by Joyce Kulhawik at 9:25 AM